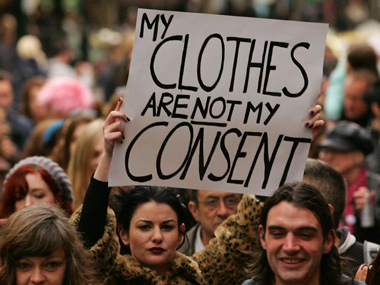 SHE | WOMEN’S DRESSING, SLUT SHAMING AND THE ISSUE OF CONSENT

“To me consent means ‘Yes I am willing to do what we have agreed to do as adults. Yes this is what I want to do and I am fully aware of what it involves’. It means I am sober enough or in the right mind set to offer a definitive yes. It can be taken away at any moment without warning or explanation. I think it is high time people spoke about this more and more because it seems to always be something we come back to.”

There is just something about the internet that leads you deep into its crevices. I often find myself on a certain site and I just wonder “argh how did I end up here I am supposed to be studying”. This is exactly how I stumbled across teaser for Tyrese and Rev’s Run’s new talk show and let’s just say that I wasn’t disappointed. If you haven’t seen or heard about the clip let me break it down. Basically Amber Rose was a guest on the show and she was talking about how fans are often so comfortable and grope her without her permission. To which Tyrese replied, that there is a type of energy that is sent out that creates that type of response. Rev Run also chimed in and spoke about “dressing the way you want to be addressed.” In response, Amber stated that a short skirt doesn’t mean that a woman wants to sleep with a man or that the she is looking for “it”. I want to stop for a moment and explore this. The whole notion of if you’re dressed a certain way, expect a certain type of attention.

Furthermore, the link between so called “sexy dressing” and consent. I think we have all heard this, especially as a young girl I used to hear about it all the time. I’m not talking about dressing appropriately, for instance if you go to an interview you look professional whether you are male or female. You aren’t going to show up in your pyjamas. But what makes it wrong for a girl to wear a short skirt out with her friends? Why do some guys automatically take that to mean consent? So if “you give off the energy” whatever that means then its okay to be cat called? “Can’t blame people for looking” is what some people say. These are the type of statements that make rape culture okay and that sometimes seem to confuse people when it comes to consent (tbh I really don’t know why it would but it seems to confuse many). On the issue of consent Amber broke it down in the best way possible. Whether a girl is undressed or had been willing to before that isn’t consent. Just in case I haven’t explained it too well I posted the link to the video and a quick commentary.

To me consent means ‘Yes I am willing to do what we have agreed to do as adults. Yes this is what I want to do and I am fully aware of what it involves’. It means I am sober enough or in the right mind set to offer a definitive yes. It can be taken away at any moment without warning or explanation. I think its high time people spoke about this more and more because it seems to always be something we come back to. Whether a girl is in a short skirt or in no clothes at all that doesn’t mean she consents to something. I think we need to stop teaching young girls that if they dress a certain way things like catcalling won’t happen. Believe me it still does.

One thing I was thinking about while writing, is an article I read a while back about backlash violence against women in miniskirts in South Africa, Zimbabwe and Kenya. In the article, the author was expressing her own fear for a young girl on the streets of Johannesburg who was wearing tight fitting shorts. She was scared for the girl because of the violence against women particularly at night in the city and the practice of stripping women. This is the same rhetoric used by people who publicly strip women that “they are asking for something,” “they deserve whatever happens to them”. Clearly society needs an attitude readjustment when it comes to objectifying women’s bodies and using dressing to infer something about women’s sexual habits and nature. However, one question I cannot seem to answer is knowing what I know about how people in mini-skirts are treated particularly in some of the countries I mentioned, should I still choose to wear them knowing that is the response I will get or should I just give in and stick within the boundaries that society dictates? What makes this situation even more complicated is whatever I choose… I most probably will be victim of catcalls and would be at risk of sexual assault.